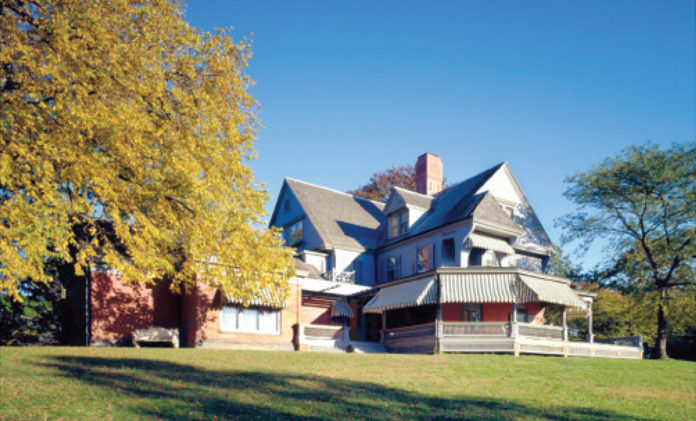 Just down the hill from the historic and widely recognized home of President Theodore Roosevelt is the once-home of his son, Theodore Roosevelt, Jr., which is now called The Theodore Roosevelt Museum at Old Orchard. The residence is equally fascinating and dedicated to our 26th president, chronologically outlining his life. However, it receives seemingly less publicity and grandeur than the house atop the hill.

When Theodore Roosevelt, Jr., the late-president’s eldest son, started his own family, he fully expected to inherit the family’s home on the hill. When that wasn’t exactly playing out the way he had expected, his mother, Edith, offered some of the acreage in the apple orchard nearby. He accepted and in 1938, almost 20 years after his father’s death, built what is now the museum.

“This museum is a great resource,” says Susan Sarna, museum curator. “It’s actually a great starting point to the rest of the property and the home.”

Although the home became part of the park service in the 1950s, Theodore, Jr.’s wife, Eleanor, lived there until her death in 1960. The museum was then established by Congress in 1962 to preserve and interpret the structures, landscape, collections and other cultural resources associated with Theodore Roosevelt’s property, and to ensure that future generations understand and appreciate the life and legacy of Theodore Roosevelt, his family and the significant events associated with him.

“T.R. Junior’s home [the museum] complements the house; gives you a better understanding and the story of the entire place,” says Sarna.

The exhibit is designed to accommodate a wide variety of museumgoers and ranges from large printed displays to more detailed explanations of the items showcased. There are three galleries and one audio-visual room, which hosts three short video exhibits. Meanwhile, the Old Orchard Museum is handicapped accessible.

“Our grounds here at Sagamore Hill are extensive; we have a lot of trees that are still here,” says Sarna of the property. “We also have a beach that looks the way it did during [Roosevelt’s] time.”

The park is open to the public and many local schools, clubs and organizations make great use of the property by hosting nature walks, bird watching, cross-country practice sessions, outdoor art and photography classes, beautification campaigns and much more to benefit the park.

“More than 42,000 visitors tour the home at Sagamore Hill, since only 200 people are permitted inside each day,” says National Park Service Ranger Josh Reyes. “It’s hard to say how many people visit the park in general though, but I would estimate it’s in the 60,000-range, including hikers, joggers and people visiting with their dogs.”

The park is dog-friendly and is a popular place for an outdoor walk with a canine companion.

“Interesting enough, Black Friday and Easter Sunday are two popular days here at the park for visitors,” says Reyes, who has been assigned to Sagamore Hill for more than 10 years. “People are probably here trying to walk off their holiday meal or maybe even to just get away from their families,” he adds with a laugh.

Reyes says that the trails are undoubtedly the best part of the 83-acre park.

“Winter is a fun time too; we get a lot of cross-country skiers and snowshoers, especially before the park is plowed,” says Reyes. Who knows, you might even catch a glimpse of some cool wildlife inhabitants like a chipmunk, white-tailed deer or a red fox.

On September 23, Old Orchard Museum debuted the exhibit “Historic Landscape Through Modern Eyes: Re-envisioning Theodore Roosevelt’s Sagamore Hill,” which features the artwork of previous participants in a juried plein air competition. Plein air is a style of painting or drawing where the artist works entirely outdoors, capturing the natural light and scenery as it’s viewed. The works will be on view at the museum through January 15, 2017.

The museum, open from 10 a.m. to 5 p.m., is located on the opposite end of the park, accessible on the walking path through the old orchard, heading toward the hiking paths and waterfront access. Admission is free to the museum, where visitors can view video segments and exhibits at their own pace.

The National Park Service operates Sagamore Hill and The Theodore Roosevelt Museum at Old Orchard, located at 12 Sagamore Hill Road in Oyster Bay. The park is open most days from sunrise to sunset. The buildings, including the home and museum, are closed on Mondays and Tuesdays. Access to the home is by guided tour only. Tours of the Theodore Roosevelt Home are offered between 10 a.m. and 4 p.m. Wednesdays through Sundays.

The admission fee is $10 per adult. Advance ticketing is suggested, since many tour days sell out (visit www.recreation.gov or call 877-444-6777). Same-day tickets can be purchased on a first-come, first-served basis (usually sold out by noon) from the visitor center, open from 9 a.m. to 5 p.m., Wednesdays through Sundays. Throughout the year, the park and buildings close on Thanksgiving, Christmas and New Year’s Day.