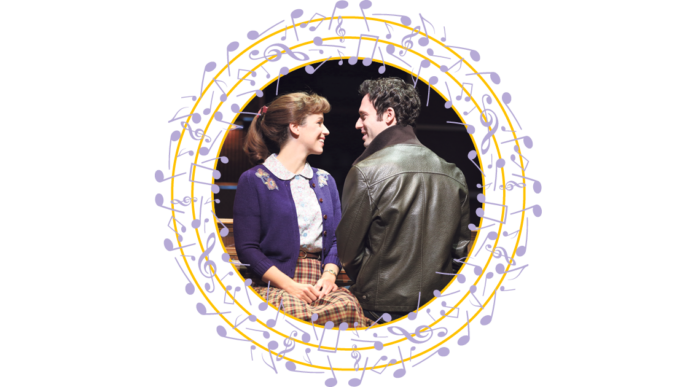 ‘‘Playing Carole King has been amazing…it’s been the role of a lifetime and I’m not just saying that…it’s fantastic. I love it,” is how Chilina Kennedy described what  it has been like to play the iconic  singer-songwriter.

An hour and a half before showtime, Kennedy and Jake Epstein, who plays her onstage husband, gushed about Beautiful: The Carole King Musical in her dressing room. Above onstage, the crew was getting ready for the show’s umpteenth performance in its successful three-year run.

“The first time I met Carole, she came to see the show and she basically played piano for me because she has a really particular playing style,” says Kennedy, who is classically trained. “It was really interesting because I play and I’m very upright, but there’s a way she gets her whole body into it. I watched a ton of videos and tried to internalize that and make it my own.”

The Canadian singer-songwriter and actress is a graduate of Sheridan College in Canada and the Birmingham Conservatory for classical theatre in Stratford, England. She succeeded Tony winner Jessie Mueller in March and received tips on how to play Carole from the singer herself. Not many Broadway stars get that kind of tutelage.

“She has been wonderfully open in talking with me about her life,” says Kennedy of King. “She always says to me ‘we’re nothing without our cast…we’re only where we are because of the people who are supporting us,’ and I love that about her.”

Written by Douglas McGrath, Beautiful: The Carole King Musical tells the story of the life and career of King in her early years, using her songs, which were often co-written by Goffin, as well as songs by friends Barry Mann and Cynthia Weil, which include “One Fine Day,” “Some Kind of Wonderful,” “(You Make Me Feel Like) A Natural Woman” and of course, “Beautiful.”

Kennedy read an original script of the musical early on and saw the potential the early script had and that “the heart was there and all of the pieces to tell something really powerful.”

“There was something about the character, I felt like I understood her. I got who that woman was and I wanted the chance to be able to dive into that,” she says.

As for her Canadian counterpart, Jake Epstein was lucky enough to originate the role of Goffin, played it for a year, left and then came back and said his return feels deeper and more fulfilling this time around. The National Theatre School of Canada graduate had known of Kennedy, but never had the chance to work with her before.

“It’s been a wonderful, challenging and a life-changing role to play Gerry Goffin,” says Epstein of Goffin, who unfortunately passed away while Epstein was playing the part. “Gerry saw the show twice, I believe, and near the end of his life he was going through a lot. The first time he saw the show I was incredibly nervous because everyone wanted me to meet him. He pulled me in and said, ‘You’re good.’ And that was enough. That meant the world to me.”

Goffin came again on opening night and was so proud of the show, which was one of the things Epstein believes kept him alive for much longer.

“He wanted his whole story, bare bones and all, to be told in a very honest way,” says Epstein. “Carole showed up to one of our first rehearsals and gave us the blessing to do the show. She asked who was playing Gerry and I raised my hand. She said ‘don’t make him the villain, he screwed up, but he’s not the villain,’ and I never forgot that.”

Epstein says that as a person, Goffin was a very complicated, troubled man, but “as an actor, you relish characters that have flaws.”

As a lyricist, Epstein finds Goffin to be beyond brilliant, writing ahead of his time at such a young age. Goffin was 20 years old when he wrote the lyrics to “Will You Still Love Me Tomorrow,” which Epstein feels is “a beautiful, complex and haunting song and the fact that he could understand a woman’s perspective on that song and with only a few words, I think he revolutionized music.”

Epstein grew up in a household that played nothing but folk music. In high school, he fell in love with Carole King, James Taylor, Paul Simon, The Beatles and Woody Guthrie, sharing that the reason he wanted to audition was because he loved the music so much.

“It was like a Renaissance of art at that time and I feel like music was leading the charge at the time and pushing the boundaries of what you’re allowed to say,” says Epstein. “A singer-songwriter was a completely new thing and Beautiful is about a shift in writing music for other people to writing music for yourself and Carole was at the forefront of all that.”

It has been widely said that King wrote the soundtrack to a generation, and both Kennedy and Epstein couldn’t agree more.

“She sure did,” says Kennedy. “People have a really deep connection to that time period and to that [Tapestry] album. Everybody has a story and can relate to one song or another. Our culture has changed a lot; people have less attachment to music.”

“For a female empowerment story to be about friendship at its core is rare. It’s not just a love story,” adds Epstein. “Their love story is about friendship and conflict and there’s a lot of comedy in it, which people don’t expect. People come because they know the music but they love it because it hits a real note in people; they just fall in love with the friendships between the characters.”

Both Epstein and Kennedy perform eight shows a week and it’s a new feeling every time they step on stage.

“It’s fun to be reminded of the simplicity of the time period,” she says. “As an audience member, I love feeling like I’ve had an experience and that’s what I hope people take away.”

“I hope people are thoroughly entertained because the show is moving, it’s funny, it’s got awesome nostalgic music and it’s a great story,” says Epstein. “I hope the audience laughs, cries and goes aha!”