New York City has a sweet spot for dessert. Jennifer Fauci explores the scintillating world of chocolate, according to Jacques Torres.

Manhattan is enrobed with chocolate shops. From SoHo and Greenwich Village to Fifth Avenue and Midtown, there is little want for something sweet. Beneath a bright orange awning sits a chocolate oasis established by pastry chef Jacques Torres.

“My love for food, sweets, chocolate and pastries, among other things, began when I was a kid. I became a pastry chef because I wanted to be a craftsman; to create and work with my hands,” says Torres, also known to the masses as Mr. Chocolate. “My father was a carpenter and he took pleasure in creating things, so that’s what I wanted to experience in my profession as well.”

Torres, who grew up in the South of France, began an apprenticeship at the age of 15, at a small pastry shop. At the age of 26, he became the world’s youngest chef to win the prestigious Meilleur Ouvrier de France award, the highest honor awarded to French craftsmen in pastry. But chocolate has always held a sweet spot in his heart.

“All my life I have had a love affair with chocolate, and after 20 years or so working with chocolate, I decided I was going to open a company and dedicate my time to chocolate,” says Torres, who chose the cocoa way of life because it is such a versatile ingredient. “You can do so much with chocolate; you can do drinks, cakes, petit fours, bon bons and you can bake. The sky is the limit with chocolate and that’s one of the things that attracted me; the flavor is complex, like wine.”

In 1988, Torres moved to the United States. Two years later, he fulfilled his American dream with the opening of his first chocolate factory, Jacques Torres Chocolate in DUMBO, Brooklyn. Today, the chocolatier has nine shops across Manhattan and Brooklyn, including an ice cream and sandwich shop in Grand Central Station. His menu includes anything and everything dark, milk and white chocolate, from chocolate-covered Cheerios, marshmallows, fruit and classic bon bons to large chocolate chip cookies and the now famous Wicked Hot Chocolate, which can be found in Torres’ many shops. And yes, he does have a favorite.

“I prefer dark chocolate. When I was a kid I loved milk chocolate because it’s sweeter, but with time, I developed a palate for dark chocolate,” says Torres, who enjoys chocolate from different origins all over the world. “I went to Mexico years ago because I wanted to learn about the origin of chocolate and how it was used hundreds of years ago. I discovered that it isn’t sweet and that they used spices, like chipotle, because it’s smoky, so I decided to experiment and it works with the Wicked Hot Chocolate.” 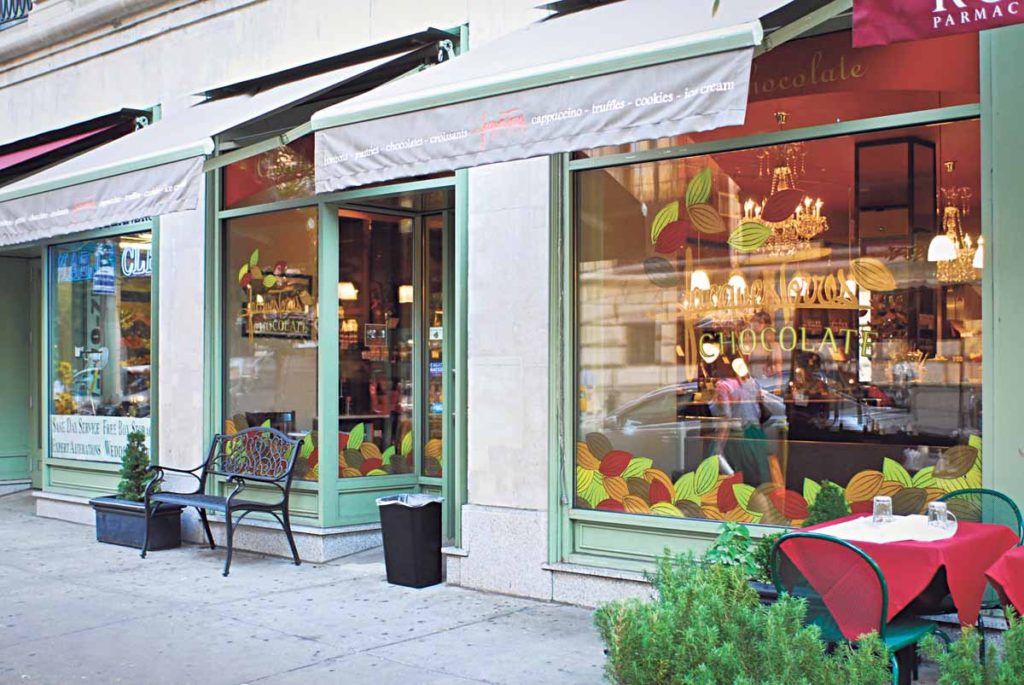 As a pastry chef, Torres loves a good chocolate cake. He also believes that chocolate can cure the common cold and is healthy, if it doesn’t contain too much sugar.

“Chocolate cake can be magical. The molten cakes, those are still some of the best desserts around,” he says. “But I also love to create savory dishes with chocolate.”

Among his many awards and accolades, Torres is also a television personality and author. He is the recipient of the James Beard Award and a member of the Académie Culinaire de France. In 2010, the chef and his fellow culinary companions prepared a dinner for the Democratic Congressional Campaign Committee. But perhaps what tops his guest list is cooking for the Pope.

“I’ve done some highly regarded dinners, but cooking for the Pope is maybe my most favorite,” says Torres of his holiness.

Torres said that some of his customers are very well-known in Hollywood and he is happy that they trust him to make chocolate for them, but for Torres, it’s just about making people happy.

“If you have the personality and you love to make people happy, one way to do that is to cook or bake for them,” he says. “Most chefs work hard to make people happy. I ask myself, ‘why do I love what I do?’ and when I see a smile on people’s faces, I know I did something right.”

As a new father, Torres has been kept quite busy, but that hasn’t stopped him from his current venture, the opening of a chocolate museum.“It’s coming together and I love it. I did it with a friend of mine who owns a few museums around the world,” says Torres of the project, which will be located at Hudson Street. “We hope to open before Christmas and are in the process of getting a giant cocoa tree and some banana trees for inside.”

Always driven by passion, Torres believes that aspiring pastry chefs should embrace the profession only if they love it.

“Get educated and understand what it takes. I learned a lot about it and spent a lot of time learning about being a pastry chef,” he says. “I can guarantee that if you love to bake and cook, you will love being a chef.”