The enlivening term “Harlem Renaissance” is often used to describe the upside of the uptown neighborhood’s many boom-and-bust cycles—with shifts to economic prosperity ushering in myriad cultural movements.

Food tends to follow good fortune and while the streets of Harlem have always been dotted with remarkable eateries, recent history has accelerated the growth of the area’s restaurant scene, from Central Harlem towards the Hudson River in the West and back across the neighborhood to the East River.

Harlem is lively, loud and always animated—and the restaurants move to that same rhythm. One of the village’s famed eateries, Red Rooster, was conceived by internationally renowned chef and Harlem transplant Marcus Samuelsson. Ethiopian-born and Swedish-raised, Samuelsson embodies the very spirit of his chosen home and his restaurant reflects the deeply diverse cultural mixture.

“The Harlem food scene is one of the most exciting in the world,” says Samuelsson, adding that the village of Harlem brings a diverse and delicious array of options from various cultures. “This community is home to African-American, Latino, Jewish, Italian, Caribbean and others. You get the expected and unexpected in Harlem. I’m constantly influenced by the creative culinary forces around me and it’s one of the most exciting places to be.”

It was the combination of Harlem’s rich culture and unwavering encouragement from his mother that led Samuelsson to hang his chef’s jacket in Harlem at Red Rooster in 2010.

“It took me over five years to open the restaurant after deciding to do so,” he says. “I spent a lot of time researching the neighborhood, connecting with the locals and I really wanted to bring something the neighborhood wanted. It was important to create a place in and of the community.”

Serving comfort food that celebrates American roots with varied international twists, Red Rooster was named in honor of a legendary Harlem speakeasy whose spirit lives on downstairs at Ginny’s Supper Club, where live music supplements the succulence of the restaurant’s menu.

Red Rooster’s menu coalesces the chef’s early life, his travels and Harlem itself.

“The menu is a good mix of my background, my travels and neighborhood favorites,” says the international chef. “You’ll see a mix of Swedish influence, Ethiopian, American comfort food, Latin and seasonal ingredients. The décor is a reflection of the Harlem community with art, music, style and the locals.”

Samuelsson’s own richly diverse background marries perfectly to the epic poem that is Harlem’s history. This is illustrated deliciously in Samuelsson’s Red Rooster Cookbook: The Story of Food and Hustle in Harlem, a food-driven love letter to Harlem the chef released last year.

In the book, the chef supplements his favorite recipes with odes to Harlem, as well as his cuisine’s varied connections to his own off-center upbringing. Of all the dishes on Red Rooster’s menu, the chef says that Helga’s Meatballs offers the truest taste of his personal background.

“I’ve had it on the menu since we opened and it’s a favorite among our guests,” he says. “My grandmother Helga was one of the first people who taught me how to cook and she showed me how to work with the ingredients I have and make it delicious.”

Samuelsson’s family roots taught him more than simply which ingredients to use and when to use them. It instilled in him the strength born from a hard day’s work—a lesson learned as a youngster in Sweden.

“My first job was a fisherman when I was young. Growing up in Sweden, I would go fishing with my uncles and it was a long hard day of work but very rewarding,” Samuelsson says. “I loved getting to bond with them at sea and then we’d come back, make the sale on the fish, go home and cook dinner. It taught me how to work hard.”

Those years of hard work on fishing boats in Sweden and in kitchens across the globe have all led Samuelsson to Harlem—and to a world where food leads a new renaissance.

“People have become much more aware in recent years about where their food comes from and who’s curating their dining experience,” he says. “I’m super excited that the audience for food culture keeps growing and look forward to seeing what’s next.”

Year Of The Yardbird 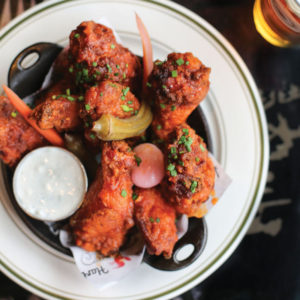 Perhaps the most visually striking dish on the menu is the Royale, a whole fried chicken for two. The server brings out the bird and presents it to its wide-eyed eaters, then takes it back to the kitchen where it is cut into pieces. The Royale’s best feature, its fried skin, is golden and crisp, while the meat excels in juiciness. Other dishes that pulse with the bustling dining room are the unctuously extravagant Shrimp and Jerk Pork Belly Hot Rice, a deeply spiced dish with pineapple, aged basmati rice and curry leaves; as well as thick panels of buttery cornbread, paired with a pat of luscious honey butter and an African-spiced tomato jam.

For a sweet touch after the meal, Red Rooster’s Coffee And Doughnuts is the dessert equivalent of a wink and a smirk, as mocha-filled donut holes are served warm with a side of dulce de leche ice cream for dunking.