It’s been 17 years since Boulevard, a specialty publication, was created. Now, publisher Angela Susan Anton felt it was time for a resurrection.

Community. A term synonymous with loyalty, fellowship and an interest of commonality among a group of people. It is also linked to the name Anton. In 1984, the late publisher Karl V. Anton, Jr., discovered a small chain of eight newspapers that were up for sale. Already a founder of a Merrick newspaper with solid experience in the Van Son Holland ink business, Anton bought the newspapers from Edward Higgins and began branching out to communities across Long Island. His wife, Angela Susan Anton, is a recognizable Long Island legend in her own right, and has carried on the company with great pride, passion and a heart for local news.

“The name Anton to me, means community and it means storytelling,” says Anton of her brand, which today includes 16 community newspapers, the arts and entertainment publication Long Island Weekly, several monthly special sections and magazines and Boulevard, Long Island’s premier celebrity, lifestyle and variety publication. “I love talking to people and I love the charity aspect of it because our newspapers are very philanthropic. I love deadlines and seeing the news is out there in a timely manner.”

Anton wasn’t involved in the publishing business until 1996, previously working in various managerial roles in her family’s business.

“I had leadership roles in the past, but working with a newspaper was very different. When I married Karl, he wanted me to come into the newspaper business,” says Anton. “He guided me and I learned a lot from him.”

Anton became involved with a multitude of boards, holding positions and attending charity luncheons and benefits. Today, she is involved in more than a dozen charities, organizations and philanthropic endeavors across Long Island and Manhattan.

“The first time I ever joined a board, it was back in 1998 and it was at the American Liver Foundation of Greater New York. They were looking for someone to chair the board on Long Island and I had never been a chair before, so they gave me this big book of requirements,” says Anton. “I looked at Karl and I said ‘I can’t do this’ and he said ‘sure you can.’”

Her philanthropic involvement extends to her role as president of the Nassau County Museum of Art board of trustees, the North Shore Child and Family Guidance Center, the Film Advisory Board of Nassau County, the New York Press Long Island Regional Board, a member of The Explorer’s Club, the Theodore Roosevelt Association, and past service as a board chair of Nassau Community College, just to name a few. In 2003, Anton was the recipient of the Ellis Island Medal of Honor award and just last year, won the spot of a character in James Patterson’s novel 15th Affair at an auction.

“I became involved in science and exploration through the Science Museum of Long Island, which led me to be an explorer and sent me to Easter Island and Morocco on these great expeditions to meet fascinating, interesting people. That’s when I took up flying,” says Anton of her adventurous side. “We’re a female-owned business and I feel very strongly about empowering women. Karl believed in me and he wanted the newspapers to go on to reach the community and help the community and he felt I was the person to do it.”

But taking over for her husband after his passing in 2000 provided a new set of challenges, as Anton faced competitors that wanted to buy the company. At that time, Anton began reading the autobiography Personal History, by Katherine Graham, whom she cites as her idol.

“She [Katherine Graham] took over the Washington Post from her husband, who died tragically. She was a young woman and in those days, it was a man’s world, and it’s still a man’s world primarily,” says Anton. “When Karl died, that book was my Bible because our lives are different, but so very similar and it helped me a lot.”

With the tenacity of a seasoned journalist, Anton weathered the storm and took the necessary steps to lead the company according to her vision and, ultimately, to where it is today.

With plenty of competition in community news, Anton takes pride in the fact that some of her newspapers, such as The Roslyn News, have been around for close to 150 years. She believes strongly in community newspapers because people always like to know what’s going on in their neighborhood and they always will.

“We’ve stood the test of time. People in the community have so many stories to tell,” she says. “I always say we make a great marriage with the New York Times because they certainly do what we can’t do and we certainly do what they can’t do.” 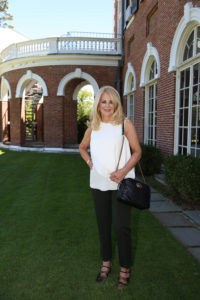 As a publisher, Anton believes she is hands on, a feat that was held true under her leadership when Boulevard was first published in 1999. Originally a paper format, the publication grew from black and white newsprint to a glossy magazine filled with celebrity interviews, fashion, coverage of the arts and picture pages of charity spotlights.

“People would call me up and say they wanted their events in, so that’s when I got the idea to do it,” says Anton. “I would sit behind my desk with all of these invitations, call people up and say if I cannot come to the event, I would love to publish photos and a press release.”

Content of the publication not only covered Long Island, but New York City as well, which allowed Anton to further lend her support to great causes and provide publicity for the story behind the picture.

“I found interesting people including my dear friend, the late Oleg Cassini, who contributed a lot to my life and to Boulevard,” says Anton, who put the publication on hiatus in March 2011. “I always had it in mind to bring it back. In this issue and moving forward, people can expect photos from Patrick McMullan covering charity events, arts and entertainment, culinary pieces, human interest stories and celebrity content.”

All of Anton’s supporters from the beginning are still along for the ride. She is proud of her staff, the leadership under the company’s president Frank Virga and that her editors work together to further embody what it means to be part of a community.

“It’s a great pride to me; we’re out there and covering the news and getting across to people,” says Anton of her company. “As a publisher, I found that I was able to serve the community beyond the newspaper with charities. We represent Long Island and New York City with interesting articles that readers can enjoy.”

On Set With The Publisher