Nonprofit relocates greyhounds from the racetrack to a forever home

When Lisa Sallie founded Grateful Greyhounds in 1998, she did so with the mindset of educating people about the little-known breed. Since greyhounds spend much of their puppy years on the racetrack, Sallie saw a need to think ahead to what’s next for the dogs, and finding them loving homes became a priority on her list.

“Grateful Greyhounds does many things, but first and foremost, we find adoptive homes for greyhounds. We want people to know how wonderful they are,” says Sallie, who is also the president of the Huntington-based nonprofit organization.

If you sit down and keep score of the number of ex-racers in need of adoptive homes, Sallie says there is a sense of urgency. Because there is no greyhound racing circuit in New York, the breed tends to fall under the radar of other organizations.

“We don’t see them [the dogs] and when you don’t see them, you don’t think about them, so it’s my job to get people thinking about them,” says Sallie, adding that the organization sets up camp at various Petco stores and street fairs across Long Island. “Greyhounds are gentle giants. They’re hounds and these dogs by nature are hunters, not racers, but racing is what people have asked them to do and they do it willingly because they love to run.”

The dogs are also known as sighthounds, meaning that they should be on leashes at all times unless they are in a fenced-in-yard, as they don’t understand the concept of boundaries. However, greyhounds are very mellow and laid back in demeanor, which makes them very easy to live with. Sallie herself has four greyhounds: Bianca, Calvin, Thor and LZ.

“Greyhounds go 40 miles per hour on the racetrack and then straight to the couch and that’s it. They like to hang out and that makes them unique,” says Sallie. “They’re quick studies. Some dogs go into foster and adoptive homes and they pick up things and learn fast because they’re eager to please.” 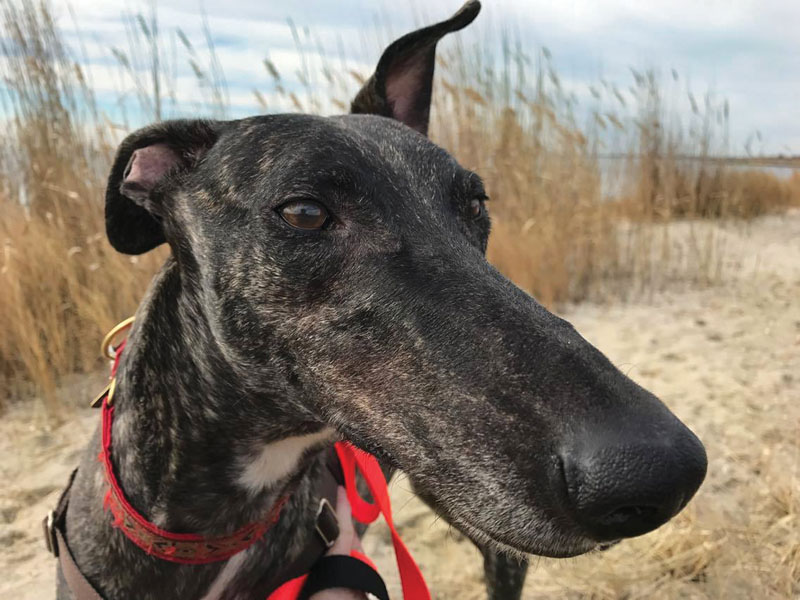 Perhaps one of the traits that make greyhounds unlike any other breed is their physical build. Made for speed, the dogs are aerodynamic, from the shape of their head and the way their ears tuck to their deep chest and tail acting as a rudder to balance them, which is perfect for the racetrack. Sallie says that within the first seven seconds, greyhounds can accumulate up to 30 miles per hour because they are sprinters, not endurance runners.

Grateful Greyhounds is neutral on the issue of racing and Sallie gives credit to the racing industry for reaching out to her when the track is no longer suitable for a dog. Typically, dogs age out of racing when they are 2 ½ to 3 ½ years old.

“We recently got three 18-month-old racers that weren’t showing the need to chase so we put them up for adoption,” says Sallie, adding that the mean age of an ex-racer that retires is about 3. “Greyhounds have a lifespan of 12 to 15 years, however, not every organization will take injured greyhounds and that’s a sore spot for me. They will be euthanized if they don’t get adopted, so we always take in injured dogs.”

Grateful Greyhounds places about 110 dogs each year. Volunteers operate out of their homes and can have as many as six dogs available for adoption. Sallie and her team are always pushing for foster homes and the best way to garner attention for the dogs is for people to see them at meet-and-greets.

“We always love volunteers to go out and show the dogs because people are always under the impression that they are unhealthy. We are accustomed to seeing big, beefy dogs and people see a fit greyhound, which is a muscular build, but they’re just fine,” says Sallie. “It’s so cool when the dogs are brand new because they’ve never seen anything other than the racetrack. It’s a very homogeneous environment.”

Grateful Greyhounds possesses a wealth of knowledge about greyhounds as they are breed-specific. For those interested in adopting, there is an adoption fee because Sallie goes one step further than just placing a dog in a good home; she makes sure each dog is neutered or spayed and is up-to-date on shots. The organization also places the dog via adoption visits and does not allow blind adoptions.

“We’re a good support system. When people have questions with house- breaking issues or sleeping schedules, we can help through basic training and tips because there are different ways to adjust them to life off the track,” says Sallie. “We are very active on social media and have many successful meet-and-greets. People need to see, touch and feel the dogs and talk to others about their experiences because they are truly beautiful animals.”

The organization has several upcoming events this spring and summer including their own fundraising event on September 23 at Belmont Lake State Park. There will be several dogs up for adoption as well as raffles, silent auctions and an outdoor picnic.

For more information on adopting a greyhound and upcoming events, visit www.gratefulgreys.com.