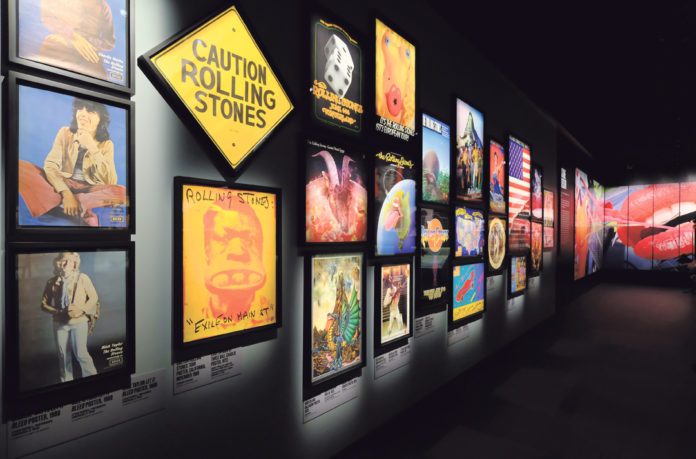 Curated by New York native Ileen Gallagher, Exhibitionism, delivered by DHL, is an interactive homage to the self-described “World’s Greatest Rock and Roll Band” that features the full participation of band members Mick Jagger, Keith Richards, Charlie Watts and Ronnie Wood. Located in the Meatpacking District section of the West Village at Industria, this exhibition runs through March 12 and uses more than 500 rare items to tell the story of the Stones dating back to the group’s early 1960s origins.

Elsewhere, there’s plenty of ephemera to get the pulses racing for the rabid Stones fan. Along with gear that includes Richards’ rosewood Fender Telecaster, a peek backstage and in the recording studio of a Stones our and recording session respectively, you’ll find Jagger’s lyric book with the handwritten words for “Miss You,” “Hey Negrita” and “Worried About You,” fanzine questionnaires filled out by the band and footage of the band playing with blues legend Muddy Waters at Chicago’s Checkerboard Lounge.

Visitors can also play with remixing a handful of different songs like “Angie,” “Under Cover of the Night” and “Miss You,” watch a video collage of the band’s music video legacy and take in the various facets of the Stones’ storied tours over the years. The exhibit takes about 90 minutes to go through and culminates in a 3-D “concert performance” of “Satisfaction.”

Visit www.stonesexhibitionism.com to find out more about Exhibitionism—The Rolling Stones, Delivered by DHL