What do you get when you have six people with the root name “Kate?” An improv group called The Katydids, of course. Caitlin Barlow, Katy Colloton, Cate Freedman, Kate Lambert, Katie O’Brien and Kathryn Renée Thomas, also known as “The Katydids,” star in TV Land’s hit new show Teachers, a comedy about six elementary school teachers who attempt to educate the youth of tomorrow, even though their own lives are a hot mess.

“It honestly all started as a joke, because I thought there was something funny about girls named Kate,” says Barlow, who plays liberal teacher Cecilia Cannon. “We didn’t all know each other, but after the first show, we discovered that we had amazing chemistry.”

“There was an improv show at the theater we performed at called Radical Concept; we thought it would be a great concept,” says Freedman, who plays the fairly lazy teacher AJ Feldman.

Originally a web series, Teachers was created by the group after director and friend Matt Miller mentioned that they all looked like educators. In January 2012, they started developing the characters and wrote short episodes.

“We only got called secretary before and that we look like we work at Ann Taylor Loft,” says O’Brien, who plays Mary Louise Bennigan, a religious and conservative teacher who has somewhat naive tendencies about her.

“We had to take the initiative to market ourselves because we didn’t have the financial backing,” says Lambert, who plays the unlucky in love, yet competent teacher Caroline Watson.

As a web series, The Katydids had very defined characters, so making the jump from several seconds to a half-hour television sitcom was a challenge, but something they were willing to take on.

“For the web series, we had been focused on getting to the joke as fast as possible, so when we were given this amazing opportunity to do a show, we explored 22 minutes of learning about story structure and character structure,” says Colloton, who plays the extremely narcissistic teacher Chelsea Snap.

Thomas, who plays the angry and antisocial teacher Deb Adler, says that they had so much creative control throughout the process, which is one of the best parts of working with TV Land.

“They allowed us to make the show our own and keep the voice of The Katydids and push it even further,” she says. 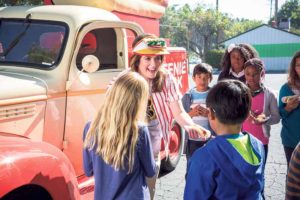 Originally, the group thought of TV Land as a traditional channel and that Teachers would be a good fit, which inclined them to pull back from their voice. When the network said they wanted more, the cast was shocked.

“Initially, we pictured meeting people, pitching the show and going to different networks, but we got incredibly lucky that the agent we worked with knew our executive, Brad Gardner, at TV Land and they were looking for something similar to what we had,” says Freedman.

A hit with teachers and non-teachers alike, the comedy’s second season premiered on January 17. With 20 episodes scheduled as opposed to the first season’s 10 and guest stars like Matt Walsh and Haley Joel Osment, fans can expect a lot more risks when it comes to topics. On the educational front, the women take on Common Core and low teacher pay, and on the topic of girl power, breastfeeding and slut-shaming are discussed.

“One of the questions we asked this season was how do we want to move each character forward,” says Colloton, adding that her character Ms. Snap wants to become more involved in politics and women in power.

Of the other teachers this season, Ms. Watson recovers from her breakup and tries to be more proactive while Ms. Bennigan matures and explores her love life. Mrs. Adler shows more of her personal life as viewers meet her husband while Ms. Feldman’s teaching style switches from pop culture to more concrete textbook lessons. As for Ms. Cannon, her role switches to art teacher as she navigates teaching with limited resources.

“The common thread is that art teachers are generally disrespected in schools who favor STEM subjects,” says Barlow.

Teachers is a female-driven show, with the creators, writers, executive producers and directors being predominantly female.

“It’s great for both men and women to see. For women, you can relate to these conversations because it gives women a voice,” says Thomas. “For men, they can see that and accept some of our flaws and actually, demographics on YouTube showed that the majority of the people who watched the web series were male.”

When asked if they ever considered a teaching career in real life, three out of the six Katydids have had experience with education, with Barlow being the only real-life teacher. She used to teach fourth grade in Chicago and has her master’s in education.

Lambert’s mother is a teacher, so there was a time when she considered teaching theater at the collegiate level.

“I never thought I’d be a teacher, but I really admire them,” says Thomas, who
actually taught an after school program for six years at a Chicago public high school.

“I have so much admiration for people who are teachers,” says Colloton. “I’m horrible with discipline. I can’t even get my dog to respect me.”

One of the unique aspects of the show is that the cast hears from real teachers about their experiences and stories. O’Brien says that really made her and the group respect teachers even more.

“We want to pay tribute to them in some way because the show is about young women in their 20s who found themselves teaching, and how they get through their personal lives,” says O’Brien. “It’s a funny show that we love and are proud of and we hope someone else loves it, too.”