Myth and legend are a huge part of Anne Rice’s oeuvre given the fact that so much of her legacy is plugged into the world of vampires, something she was writing about long before Twilight or True Blood ever came along. With her latest effort, Prince Lestat and the Realms of Atlantis (Knopf), Rice intertwines her rock-star-turned-vampire-king protagonist Lestat with the fictional isle of Atlantis. And while the Louisiana native initially started out trying to pen a project about the latter, Lestat proved to help break the New Orleans native’s writer’s block.

“I’ve always been enthralled with Plato’s tantalizing story of the lost kingdom of Atlantis. Reading Graham Hancock’s fascinating book Underworld—about the possibility of a worldwide rise in sea levels 12,000 years ago—heightened my interest and then there was Edgar Cayce’s amazing reports about Atlantis,” she explains. “It all fed into what became an obsession on my part with doing my own version of the lost civilization. So I developed a book called Born for Atlantis with a whole cast of characters that I loved. But I was stalled on it until it occurred to me to bring Lestat into the mix, to connect the tragedy of Atlantis with my vampires. It proved magical for me and the new Lestat novel caught fire.”

Given that Rice’s literary bailiwick has been vampires, she had ironically never read Bram Stoker’s totemic Dracula. Hollywood instead served as her primary inspiration.

“As a child, I’d seen a jewel-like black and white film entitled Dracula’s Daughter, the charm and ambiance of which I never forgot. I wanted to explore vampires as tragic figures, beings of heightened sensitivity and awareness cursed by their need to drink human blood,” she says. “I was also much inspired by a miniseries I saw called Frankenstein, the True Story (1973), penned by Christopher Isherwood, which gave a lush and sensuous treatment to the classic tale. I wanted to write something romantic, erotic and beautiful about vampires. I wanted them to be the focus and to be on their side. That’s how it all started for me.” 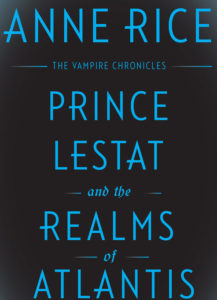 In the four-plus decades since Rice made her publishing debut with 1976’s Interview With the Vampire, she has churned out series centered on non-vampire centered beings. But regardless of how far afield she’s gone with these other books, Rice has always returned to vampires, particularly the notion of them being romanticized beings. It is this approach that’s made her much loved in the goth community, particularly when it comes to the fictional Lestat, a character she’s returned to on a continual basis.

“I can’t explain why Lestat means so much to me. Of all the characters I’ve explored, he provides me with the most intensity when I write. He feels utterly real and he’s with me everywhere I go, witnessing the world with me,” she says. “When I write from his point of view, it is as if I’m channeling a personality that is distinct from me and has marvelous stories to tell me. Lestat was inspired by my husband, Stan. I modeled Lestat on him physically and his strength and convictions fired the personality of Lestat. But at some point, Lestat became his indomitable self, and I let the character go. I yielded to Lestat and with The Vampire Lestat, the Vampire Chronicles was born.”

Lestat and the rest of Rice’s fictional vampire coven boasts a deeply loyal fan base that can be traced to the complexity of the characters. While bearing predominantly immortal attributes, Rice has given these bloodsuckers clay feet, which allowed her to introduce a bit of complexity to their makeup. Its end result has been to make her just as eager to further write about them, particularly Lestat, as it is to have readers eagerly await their next appearance in print.

“Lestat’s appeal is his complexity. He’s bold, brash, a born rebel and won’t settle for the world’s opinion of him or vampires in general. Yet at heart, he’s loving and ruthlessly honest and readers have always gotten that. Lestat is a tragic hero and a comic hero. He’s caught in an impossible situation—he’s immortal as long as he drinks human blood,” she says. “But he is a comic hero in the sense that he is never securely defeated. No matter who tries to destroy him, Lestat triumphs and comes back. I can’t wait to write the next book about Lestat.”