A fresh ingredient straight from the garden

Sometime before the 1930s, an opportunistic farmer somewhere in America noticed a plant was producing a tomato that was uniform in shape and color. The rounded shape made shipping the fruit a breeze and the all-red color was more enticing to customers’ eyes. So, after agricultural experiments, a new tomato variety containing this “uniform ripening” mutation was released—they dubbed it, All Red.

But breeding uniformity into tomatoes had the unfortunate side effect of sucking out all the flavor. Now the bulk of tomatoes we eat today pale in comparison to the tomatoes of a century ago. Because we demanded tomatoes outside of the traditional season of June through October, and ones more cost-effective to ship, what we’ve ended up with is a perfectly round and perfectly boring tomato with bland flavor, along with a plastic exterior and a Styrofoam-esque interior.

Here’s where those fanatical seed savers come into play. As if they split open a tomato and saw the bleak future, some growers saved seeds for generations, giving us heirloom tomatoes. These antique strains of the fruit and/or vegetable create tomatoes of various colors and sizes, with unsightly bulges, striking shades and the taste of a real tomato.
And varieties go beyond Beefsteak or cherry or plum. Heirloom tomatoes boast cool names like Black Krim, Amy’s Super Gem and Dixie Golden Giant. They can be found at farmers’ markets or local grocery stores with expanded produce sections—or, for more agricultural individuals, seeds can be purchased online for home growing. 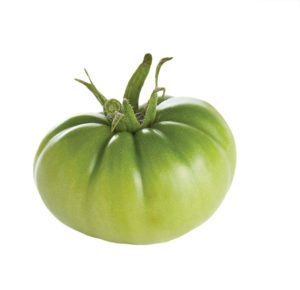 As an ingredient in dishes, heirloom tomatoes easily replace the mass-cultivated versions. A garden-fresh bruschetta atop crusty bread or grilled chicken blatantly displays the array of heirloom tomatoes, while Burrata and Caprese salads are taken to far more flavorful levels when heirlooms are used in the dish’s recipe.

While replacing canned tomatoes with heirlooms in your Sunday sauce is a daunting task, your ancestors would be proud of your homemade, from-scratch efforts. A classic heirloom tomato sauce with fresh basil is a deep-flavored and fresh take on the all-day simmering pot.

And the health benefits attributed to tomatoes are numerous. They are a rich source of antioxidants, including lycopene, an antioxidant that is highly effective in scavenging cancer-causing free radicals, while also exerting a protective effect against cardiovascular diseases. Tomatoes are also a tremendous source of vitamins C and A, along with iron and potassium.

Dig a little deeper at the market and when you pull out those weird, bumpy tomatoes, say a quiet “thank you” to the seed savers.